If you're here, then you came to download a monitor for your acx100 card(s) in FreeBSD 5.2 or later. I'm assuming that you already have your acx100-based device nicely working using the fine driver from wlan.kewl.org and would now like a nifty, yet unfinished, X-Windows based utility to monitor your signal quality, level and noise, and to view/set the sysctl variables associated with the driver.

This monitor works only with the version of the FreeBSD acx100 driver dated 20040416, download driver, and nothing else: either older or newer.

Download the acXmonitor v058
This file contains only the acxmon application, source will eventually be available at wlan.kewl.org when it's ready. 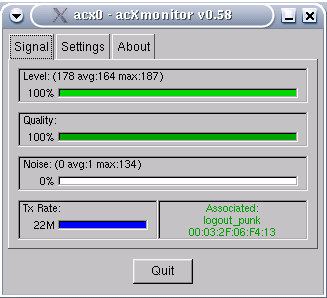 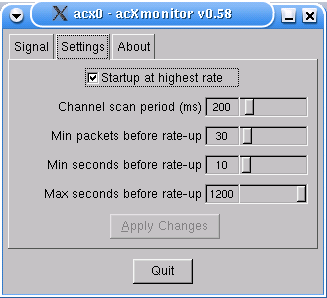 Start it with a command line like this: acxmon device [samples] [showraw]. Where the required param "device" is acx0 or acx1, etc, and the optional 2nd parameter: "samples" is a number between 1 and 60 (don't include the brackets) which defines how many 1-second samples to average before updating the signal bars, default is 1. The optional 3rd param (you must specify the 2nd param to use the 3rd param): "showraw" is either 0 or 1, depending on whether you'd like the signal tab to display the "raw" signal values from the driver or not, default is 0 or off.

v0.58 4/25/2004
Added a tab to view/set the sysctl vars associated with the driver. Using the new vars from 20040416 available from the driver for the tx rate capabilities/reporting on the signal tab.

v0.55 4/9/2004
Added a progress bar depicting the current rate in Mbps and a small display for the currently-connected access point's ssid and mac address.

v0.5 4/1/2004
Modified signal level and noise (signal-to-noise) calculations to match the update to acxtool. Removed extraneous tabs until they actually do something. Had some decent info reporting working ala wicontrol.c, but needs work, backed it out quickly. This is the pre-cursor to being able to configure the card using the monitor...now, if I could find the ifconfig source...

v0.42 4/1/2004
Per Darron's request removed the log function as a hard-coded calculation for the signal-level and instead added it to the command-line as an "option".

v0.41 4/1/2004
Per Darron's request added a log function to the level calculations and fixed the problem with the total samples' hours:min:seconds not displaying correctly after an hour. Also remembered to "strip -s" the executable before tarring, which I forgot on version 0.4, my apologies.

v0.4 3/31/2004
Added "average" data progress-bars to the signal tab and removed the "samples-per-update" dial-widget since it takes up so much screen-space and once you've settled on your number it's really not likely to change, so, folks: use the command-line to set your samples-per-update number, personally, I *still* like and use the default: 1.

Per Darron's excellent request: added "raw" signal-data to the signal tab's progress bars' labels, this should facilitate the discovery of the firmware's actual top-end, once reliably established the Linux driver team should be able to use the data as well. Removed extra Fl_Box items and instead am now using the labels of the progress-bars to report their data, this now requires the "group" that holds the bars to be updated every sample, a trade-off, but worth it I think. Added an additional Fl_Box item to signal tab to report various params.

v0.2 3/27/2004
Added "dampening" feature allowing more than one 1-second sample to be averaged before updating the signal bars. Only worked correctly with the driver version dated 1/29/2004. File deleted from site.

Planned features in the order they are likely to appear: